This was originally posted January 23, 2018
29
Twenty-nine times before this, I had seen things most can go a lifetime without witnessing much less managing. Twenty-nine critical or acutely ill sicknesses. Sometimes clearing an airway. Sometimes Oxygen. Sometimes only silent prayers.
He called back pretty quickly after I texted him. “Yes, you can have clearance to fly. How is she?” My doctor asked as he informed me that I could fly with Landrey in the Children’s leer jet.
It was January 20, 2016. Landrey quite simply was on the brink…again. This was time number 30.
She was three.
I was five months pregnant with our son Stallings living in Texas. Joshua had taken a job in another state about 10 hours away. I also had a four-year-old.
Earlier that day I had an interaction with one of Landrey’s physicians that has challenged and changed my entire perspective as I sit here and type. We were 2.5 hours from Children’s hospital because she was too critical to make it all of the way. We were at a smaller local hospital waiting for transport. I thought they would send an ambulance. I flippantly said, “I’m just going to drive her. I can make it. I’ve seen her sicker.” One of her pediatricians slowly shook his head no, “I’m afraid she is sicker than that.” During this wait for transport, I mentioned some of the fears I face with her in the future. Some too ghastly to type. He paused and said,
“You need to be thankful for every day you have with Landrey.”
I can’t shake it. Those words. They are so basic. But something coming from one of her brilliant physicians who knows more than they can explain about her made me understand something that can’t be described.
Sometimes I feel like Landrey’s life is like waiting for the Children’s Jet to come save us. To take us to a place where they understand her better, where they are equipped to manage her issues and can fix it. Surely, someone’s on their way with answers. I mean all of these tests we always run. Someone today, January 23, 2018 will find an answer as to what is tying this together and how to help her. 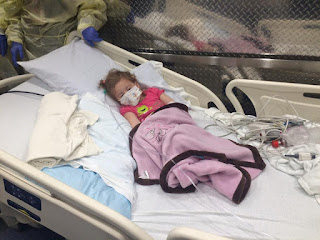 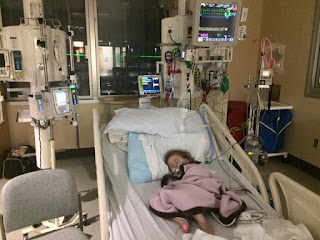 Just three nights ago, I held her at 4:30 a.m. as her breathing became irregular with seizures. Surely, they will find a drug that works on her to stop the seizures.
Landrey kept digressing that January 2016 day. She went into the ER with respiratory distress, we finished the day barely hanging on at one of the top-rated Children’s Medical Centers in the U.S. The medical center was full. It took 12 agonizing hours to come get us.
I kept watching her digress rapidly. I felt like I was watching her die and no one was able to save her.

Someone will charge in like Children’s Transport does with the flight suits on. They command the ER room, an air of confidence that is unmatched in an undefeated college football team. Maybe you’ve never seen it. Their voices are louder. Their hands are steadier. Their steps are purposeful. They take control.
My phone rang. It was Landrey’s cardiologist. I’ve been around some coaches but I’m not sure anyone can give pre-game talks like this woman. “Kristen, I need you to do something for me. I need you to be strong. She will feed off of you. If you’re at peace, Landrey will sense that peace. You don’t want them to have to intubate her in the air.” I wanted to cry. I was pregnant. It’s normal. Every time I wanted to cry I pretended I was winning something. Like I was beating the sickness for her with my smile.

Every time I wanted to cry I pretended I was winning something. Like I was beating the sickness for her with my smile.

“You must be Landrey. You must be Mama.” We’re Children’s." They bring in their stretcher. They go to war. They didn’t flinch and neither did I.
Within 24 hours after the flight and them deeming Landrey completely under control, she took a severe and near-death turn. Landrey’s cardiologist then was in private practice. She wasn’t at that hospital. She cleared her schedule. Every been at a doctor’s office and they are running behind? They might not even be there. They might be 30 minutes away in the CVICU of a hospital they don’t round on, sitting with a mother whose baby is fighting 80 breaths per minute on aggressive Oxygen support. Her body is tiny and helpless. She didn’t have energy to open her eyes. Her chest moved at least two inches out each time just panting to get oxygen as the rest of her body was completely limp.
We’ve learned a lot since then and yet we know less medically than anyone would imagine. The things we have learned are my worst fears. You know the ones you pray in a whisper and beg God that you’ll do anything not to have to bear. And yet, you’ve been chosen. You’ve been selected to showcase at this moment what to do with your faith and attitude when you don’t get your way, at pretty much anything.
I’m reminded today that Landrey is someone I can talk about on social media. But you too probably have something you face. It might not be as dramatic or something you can publicly discuss, but it’s big because it’s what you been asked to carry. Maybe you are waiting to be rescued. Maybe you’re waiting for your break, some answers, some relief. Maybe the future feels more complicated than it even did two years ago.
Some things we may never know. Some things we may not ever understand. But what I do know is that He is real. God. He has been changing my heart from fear to gratefulness. Sometimes I don’t have enough faith to believe that it will play out like I pray it will. So today I just chose to be grateful for what He has done. If I focus on what He has done instead of what He hasn’t in my life, then somehow my bitterness subsides and my faith grows.


Sometimes I don’t have enough faith to believe that it will play out like I pray it will. So today I just chose to be grateful for what He has done. If I focus on what He has done instead of what He hasn’t in my life, then somehow my bitterness subsides and my faith grows.


10 more times since living in our new state.
40 critical illness in the first four years.
“Thankful for every day”
A very simple message that drives me to investigate my motives, surrender my pride, eradicate my fear, and focus on His provision.
“But the eyes of the Lord are on those who fear him, on those whose hope is in his unfailing love, to deliver them from death and keep them alive in famine. We wait in hope for the Lord; he is our help and our shield. In him our hearts rejoice, for we trust in his holy name."
Psalm 33:13-21

Landrey is the first in the United States to be diagnosed with the condition of a rare gene mutation of the CSNK2B gene. She battles myoclonic epilepsy, intellectual disability, a congenital heart defect, and immunodeficiency. She spent the first 73 days of her life critically ill on life support enduring a major open heart surgery, surviving four codes. Until the age of four, Landrey was critically or acutely ill 40% of her life fighting through almost 15 hospitalizations.

Landrey, age 5, enjoying a day at the beach